Landfarming remediation technology
Landfarming is an on-site remediation technology for soils contaminated by organic compounds (e.g. TPH), where autochthonous microbial communities perform the degradation of organic contaminants in the soil matrix. The related metabolic processes are oxidative-aerobic: heterotrophic microorganisms in the matrix under treatment (soil, sediment) use the organic contaminant as a source of carbon and energy and oxygen as an electron acceptor. The process consists in the microbial biodegradation of organic contamination, but it clearly differs from natural attenuation as, during the process, the main parameters that regulate the kinetics of the reference oxidative processes are optimized by accelerating them.
The industrialization of landfarming processes has led to the development of techniques and operating methods that are aimed at achieving decontamination results in certain times, using roofing structures that prevent leaching from contaminated soil by precipitation, minimize the production of leachate (otherwise inevitably large and difficult to manage) during remediation, and in general make the technology sustainable and reliable, especially in the case of high production requirements.
DND Biotech has developed an engineering process and workflow from laboratory scale testing to on-site full-scale works, to optimize the landfarming treatment and minimize uncertainties related to the bioremediation process.
This workflow was applied for the engineering of a 15,000 m3 landfarming treatment plant, with the objective of remediating TPH-contaminated soil from a KPI plant in Naples, southern Italy. Preliminary laboratory testing was firstly conducted, focused on the characterization of contaminated soil and the selection of the most appropriate biostimulation & bioaugmentation treatment protocols, followed by the full-scale project design and execution plan.

The following treatment protocol was applied to the sampled soil:
1. Bio-stimulation treatment to correct the C/N to 10/1
2. Bioaugmentation treatment with autochthonous fungine inoculum
The adopted protocol provided for the isolation of autochthonous fungal strains in the matrix being treated, capable of breaking down sample chemical structures, by setting up enrichment tests in the presence of diesel fuel. Diesel fuel was used in quantities equal to 1% v / v in minimum Basal Salt soil Medium (Na2HPO4 2.2 g; KH2PO4 0.8 g; NH4NO3 3 g in 1L of H20).
The enrichment microbial culture was plated on agar medium, chosen for the growth of the fungal fraction capable of using diesel fuel as the only source of carbon. The candidates were distinguished phenotypically, by observation of the morphology on the plate and taxonomically characterized by sequencing of the 18S rDNA. 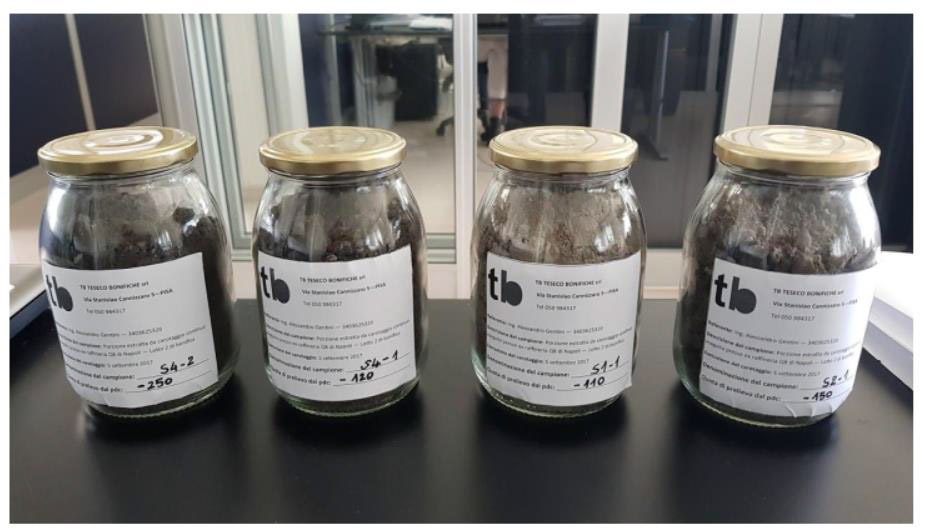 The metabolic capacities of fungal candidates were evaluated both in terms of diesel depletion capacity in liquid culture and in terms of degradation capacity. In this context, an anthraquinone dye was chosen -Remazol Brilliant Blue R (RBBR), whose chemical structure makes the compound extremely recalcitrant to biodegradation. The possible ability of fungal morphotypes to degrade and / or discolor a solution of RBBR was considered as an indication of a metabolism of interest in the biodegradations under study. The selected fungal candidate (3fb) showed a good discoloration capacity of anthraquinone even in stressful conditions, discoloring the control solution in just five days and not demonstrating discoloration effects related to bio-adsorption.
The selected microbial strain was tested in mesocosms trials using contaminated soil samples, to validate its performance for bioremediation under biostimulation and bioaugmentation treatment protocol. The results of such testing are showed in the following figures.

While the samples showed a much higher initial TPH concentration than the limits identified for bioremediation treatment, the selected inoculum still performed remarkably.
The data obtained show contaminant concentrations different from those corresponding to the zero time, that is to the time of preparation of the microcosms, indicating an average depletion of 50% which in the composite medium at greater depth is statistically different and greater (P> 0.05) compared to that observed in the most superficial composite medium (0.5 MC S124).

Figure 2: Percentages of depletion of contamination over time (days) in microcosms fined with lignocellulosic matrix and inoculated with 3fb, for different soils samples 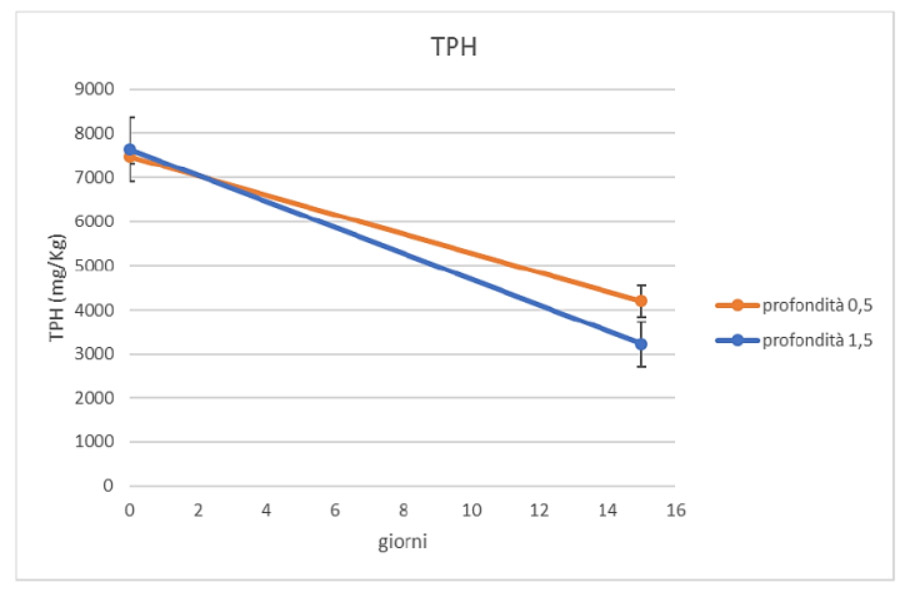 Figure 3: Concentration of TPH over time in mesocosms tests using soil samples from different depth levels (0,5m – 1,5m). The microbial inoculum achieved a significant reduction of TPH in under 20 days

In conclusion, it was observed that the contamination of the soil samples responded to the bioaugmentation of native bioinoculum with kinetics of interest, which showed a reduction of contamination in heavy hydrocarbons between 40 and 50% in just 15 days. Specifically, in the more superficial profile of the collected cores it went from 7478 ppm to 4196 ppm. In the deepest profile, it went from 7633 ppm to 2227 ppm.
The data indicated that there was a microbial community indigenous to the matrix under treatment, competent for the biodegradations of interest, which responded to combined stimulations via biostimulation and bioaugmentation. This allowed to transition towards the design of the full-scale landfarming treatment plant.

Phase 2: Engineering of full-scale remediation works
The engineering of full-scale remediation works, based on the preliminary laboratory findings and general principles of landfarming technology, was designed as follows.
The area intended for the treatment of Landfarming was 18,000 square meters, located next to the contaminated site premises on KPI premises. Other than the soil piles undergoing treatment, for a total of 15,000 m3, the designed treatment plant included a soil pretreatment station and storage facilities for soil amendments.
A metallic structure was designed with the objective of covering the soil piles and protecting them from atmospheric agents, avoiding leaching of rains and the production of leachates. The roofing structure allows a relative control of temperatures, isolates the heaps from the leaching of rainwater, facilitates the regulation of the humidity of the heaps, reduces the production of leachates, reduces erosion caused by atmospheric agents and the spread of any dust. 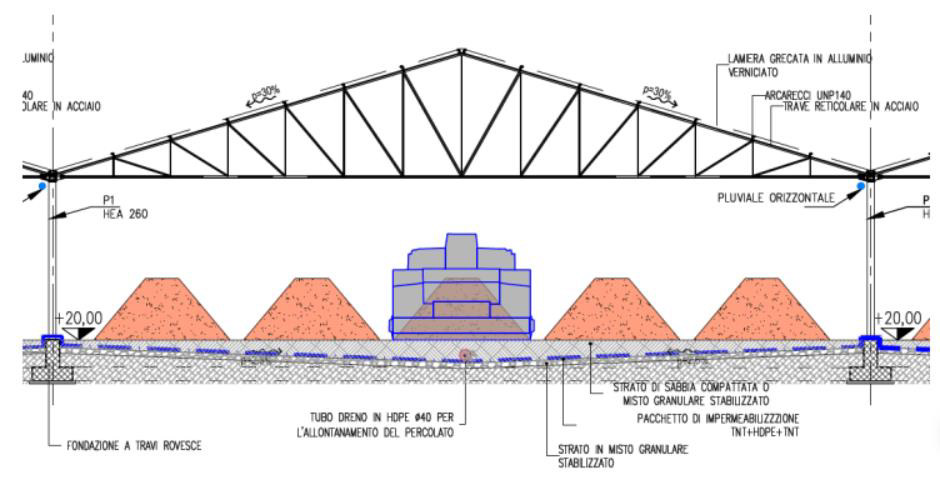 Another element necessary for the industrialization of the process is the efficiency of oxygenation of the soil being treated. The aeration of the matrix in the landfarming plant was designed to be carried out by means of suitable turning machines that operate on semi-triangular cross-sectional piles. Turning should be frequent at the beginning of the treatment cycle (weekly), as this is the phase during which biodegradations from microbial activity are significantly more rapid and are favored by a correct supply of oxygen.

Biodegradation processes slow down with the decrease in the concentration of the contamination, and it is necessary to maintain frequent turning to ensure the continuity of oxygenation of the matrix in the presence of other limiting factors such as the bioavailability of contamination. The turnings must also remain frequent while inoculating the soil piles with the mix of microbial species of interest selected during mesocosms tests, whose oxidative metabolism must be facilitated.
In industrial practice, the matrix entering the landfarming plant firstly had to be corrected in the ratio of macronutrients C/N/P. The use of nitrogenous and phosphate chemical fertilizers was included in the project design, for this purpose.
The engineering of the landfarming, in addition to the operating methods, was based on an advanced control of the process parameters directly in the matrix being treated. This resulted in the detailed design of a proper monitoring program for soil undergoing remediation, covering both bioremediation performance and its environmental impact.
A monitoring plan of the landfarming plant was necessary to optimize the biodegradation rates of contaminants of interest, to determine the kinetics of contamination abatement, to monitor vapor emissions or the migration of contaminants in properly collected rainwater and leaching water.
According to the final project design and execution plan, the remediation target of a TPH concentration under 750 mg/kg (for soil intended for areas for industrial use) and under 50 mg/kg (for soil for areas for residential use) was scheduled to be achieved within a maximum of 16 weeks, according to the results achieved in the laboratory and mesocosms testing scale.

About the Author: DND Biotech